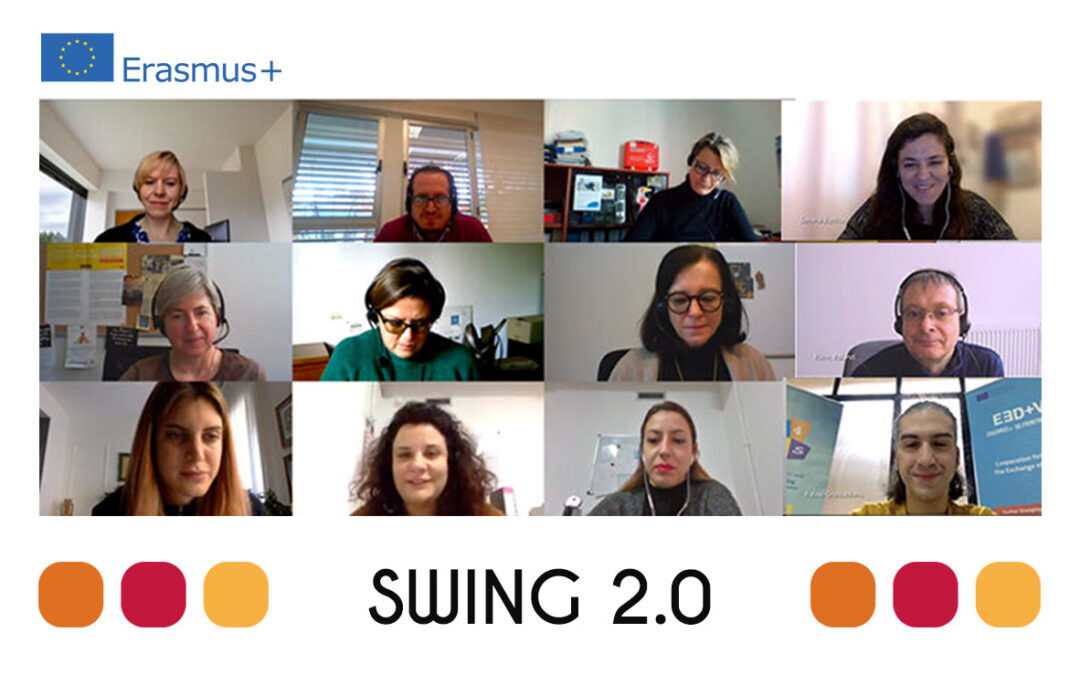 After the great success of the SWING project, we’re back with SWING 2.0 the new project for the sign language

On 3th and 4th of December 2020 thanks to an online conference due to COVID-19, took place kick off meeting of our brand new KA2 project SWING 2.0.

One of the major barriers for Deaf people or with hearing loss is the lack of recognition, acceptance and use of sign language in all areas of life as well as lack of respect for Deaf People’s cultural and linguistical identity.

This leads to marginalization of them in different aspects of life. In fact, there are a wide range of professionals who are interacting directly with deaf people, such as health workers, civil servants or other like salesman, waiters, or tour guides which could need a specific training in basic sign language tailored to their necessities to facilitate some services and full integration of deaf collective, even as workmates, increasing their job opportunities.

The intention of SWING 2.0 is following the steps of the successful SWING project and facilitate, with innovative and free own developed tools, the acquisition and use of basic sign language in different work environments where its use could enhance the integration of deaf community at different levels.

Specifically, the expected results of the project are:

The kick-off meeting was a great occasion to present the partners of the consortium and also to talk about the first steps of the project. The consortium is also working on the visual identity of the project and on the creation of the social media channels. 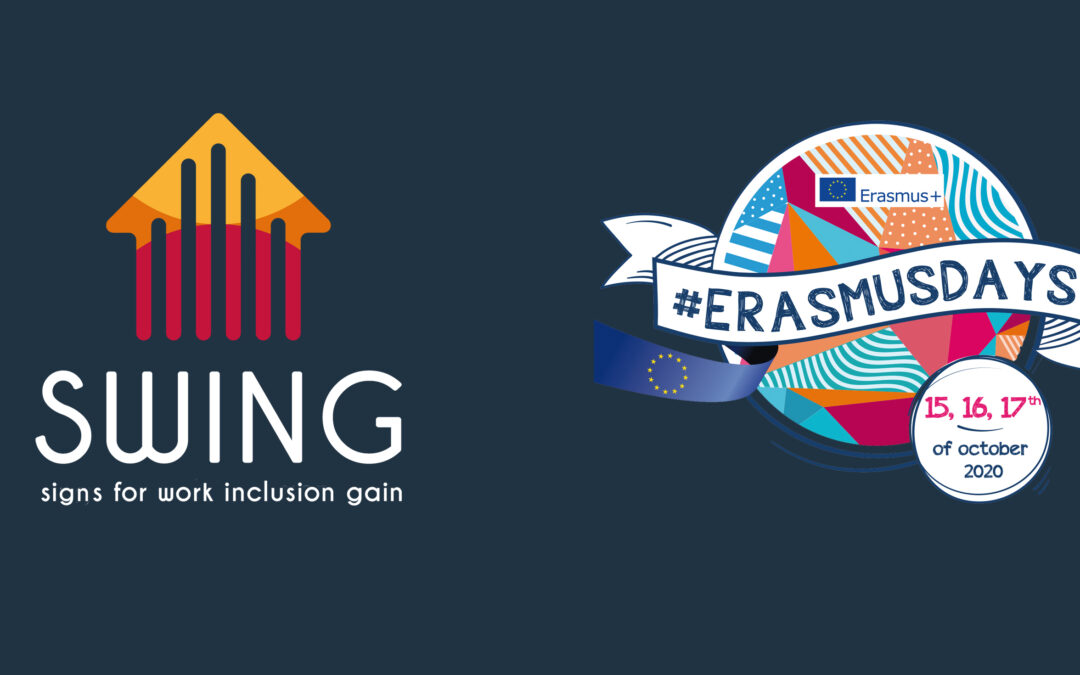 On 15th October 20 the consortium of partners participated in the Erasmus days, an initiative that involves all of Europe in 3 days of events and activities in which the Erasmus Programme is presented!

The 2019 edition saw the organization of 3995 events in 51 different countries.

This year SWING consortium decided to participate thanks the realization of a podcast in which the Italian partner CEIPES focused on a very important topic: the role of technology in today’s teaching and the acquisition of basic and professionalizing digital skills within different target groups.

SWING: Signs for Work INclusion Gain Disorders (Project number 2017-1-IT01-KA202-006157) is a project aimed to create is born with the aim of supporting deaf people in the workplace through the development of a video-dictionary in 4 different Signs Languages with work technical terms in the fields of culinary, furniture and tourism.

Projects team is composed by 5 partners – organization with different profiles from 4 different European countries: Italy, Spain, Germany and Hungary. The partners have a background both in the deaf, Special Educational Needs and technological fields.

During the podcast there was an excursus on the role of technology with regards to the emergency situation in which we are living, on the data security and what the EC is doing through the digital agenda in terms of data and people protection, up to the use of new technologies such as KET and 4.0 manufacturing technologies, such as Additive manufacturing, in specific sectors but above all in the didactic field and with groups of disadvantaged students.

A special thanks goes to ANG radio – Youth is in the air volunteers who made the event possible.

To listen the podcast in Italian languages please click on the following link: https://soundcloud.com/user-975488990/erasmus-days 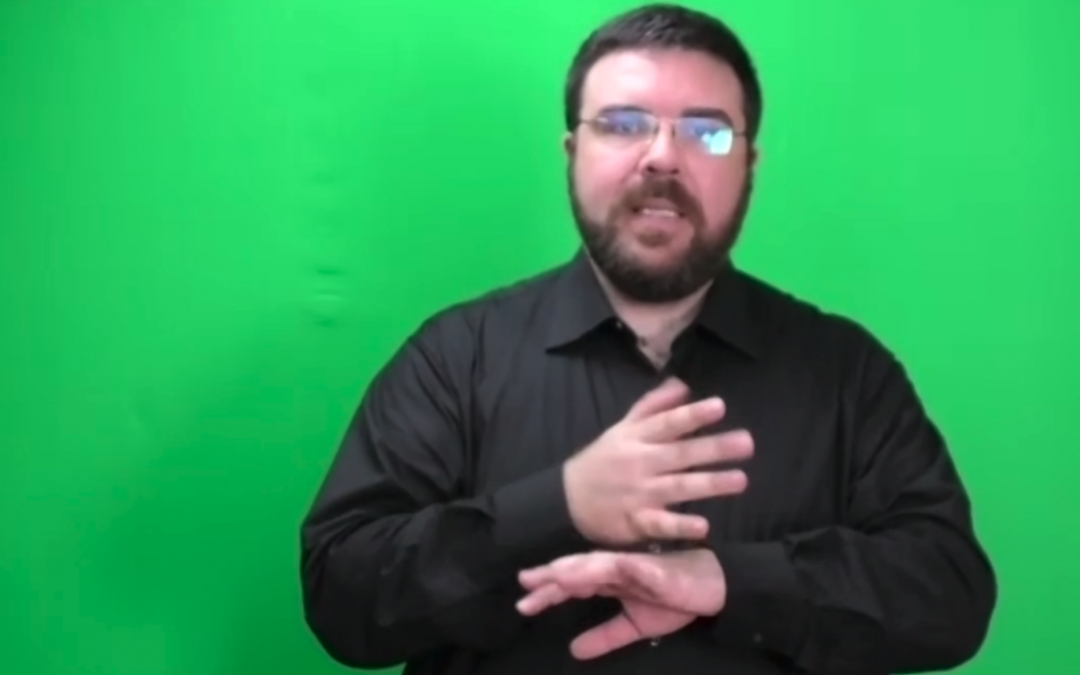 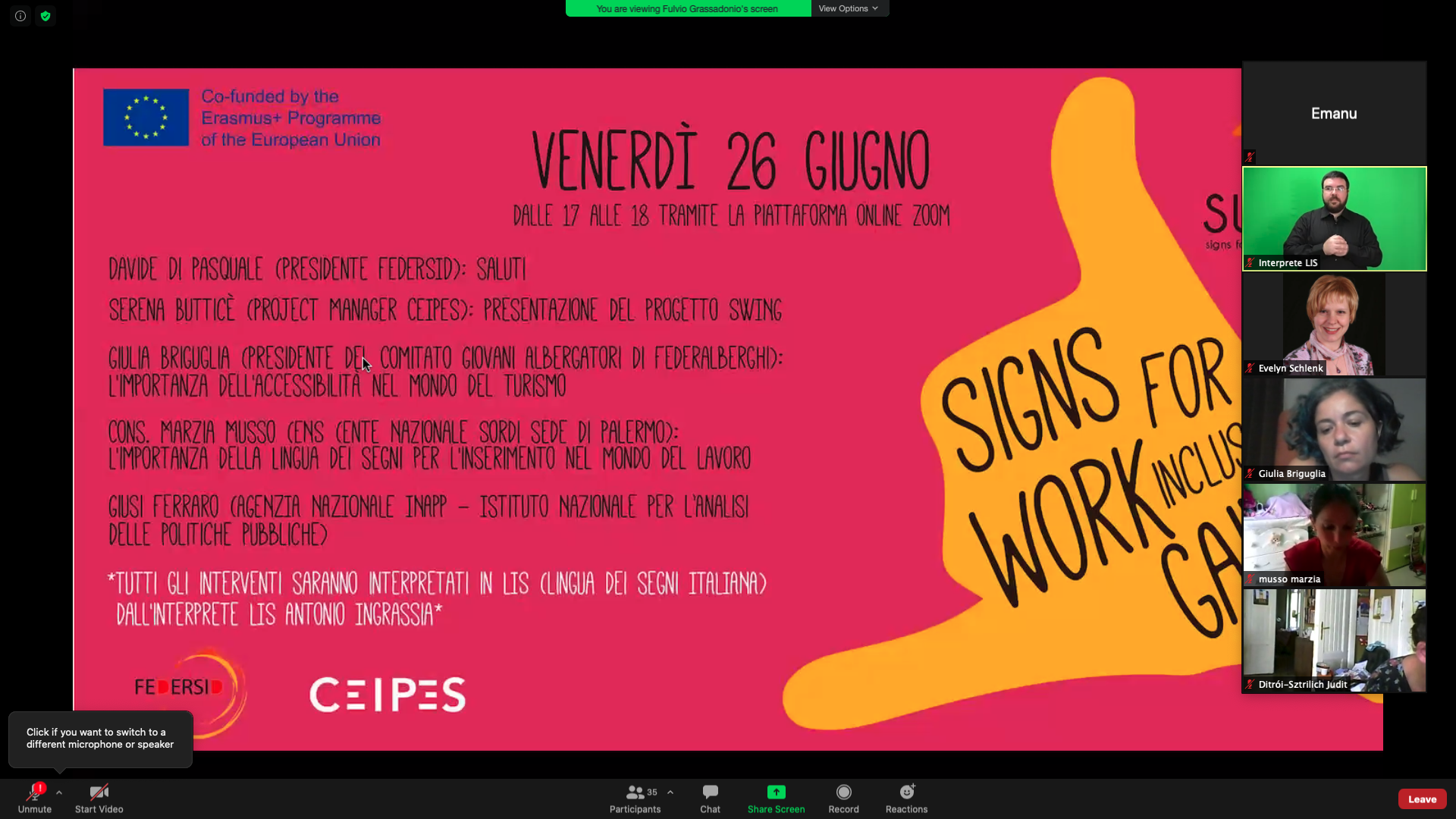 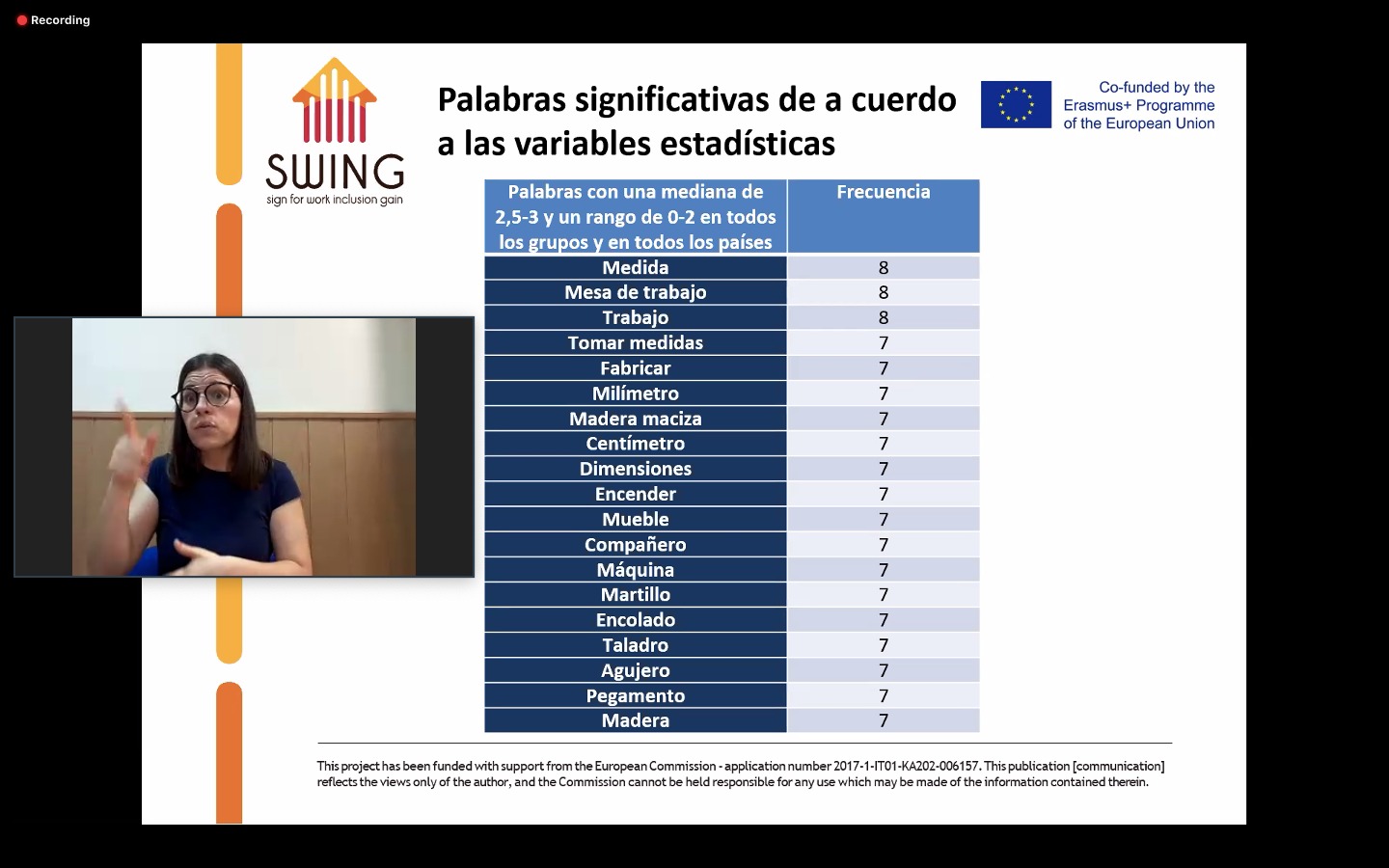 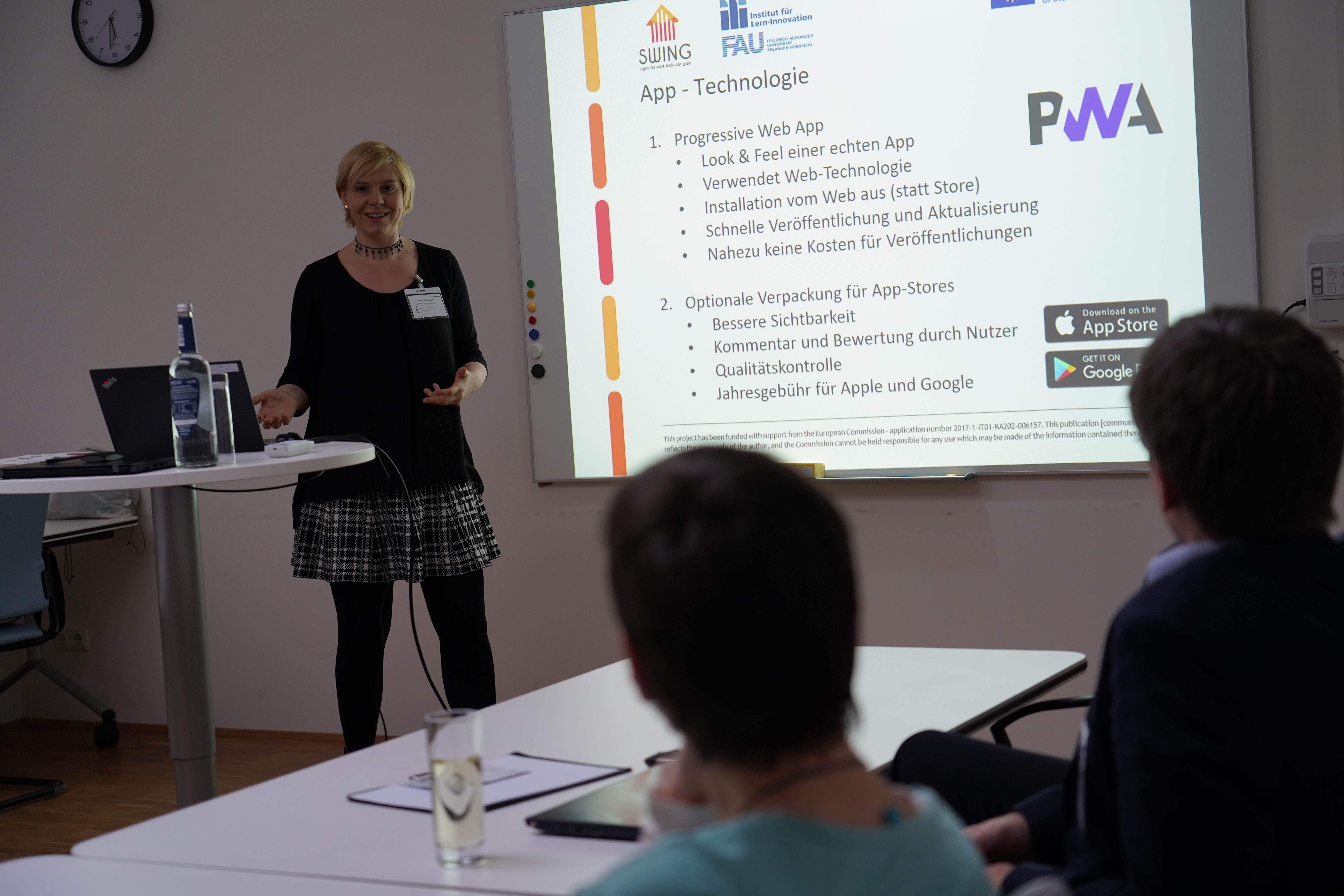 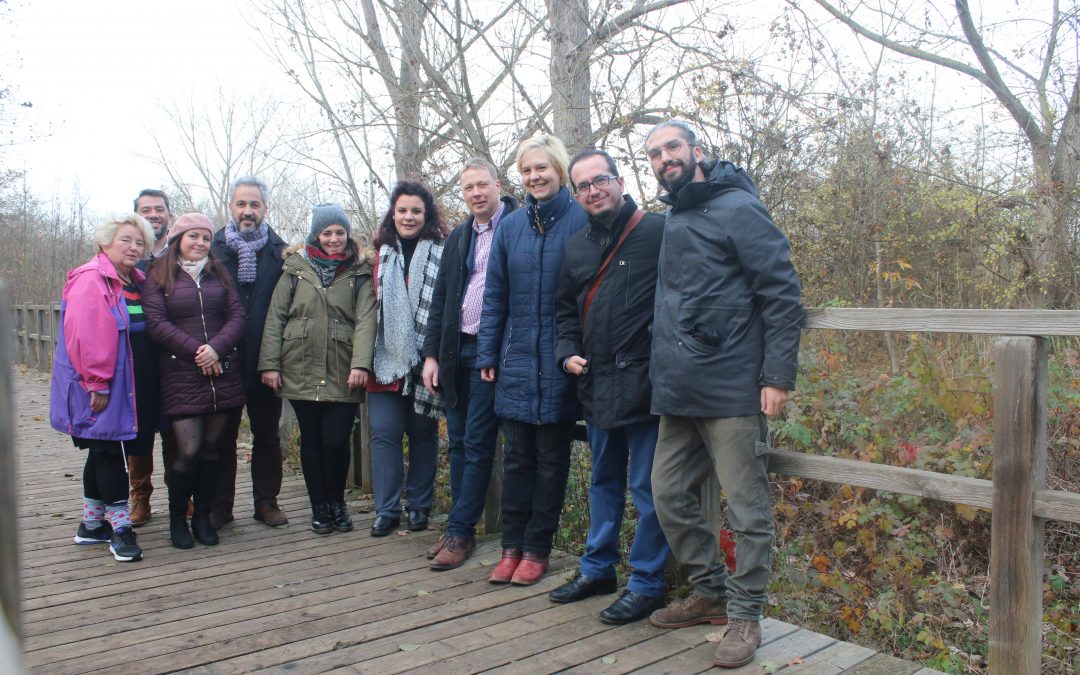 Our 4th Transnational Meeting in Germany!

On 26th and 28th of November 2019 the 4th Transnational Meeting of the SWING project took meeting took place in Nuremberg, in the headquarter of the German partner, FAU – University of Erlangen-Nuremberg (Friedrich-Alexander-Universität Erlangen-Nürnberg).

We are very happy for the work done on these days, everything continues right on schedule.

This ERASMUS+ project is aimed to create a dictionary of 4 sign language (Italian, Spanish, German and Hungarian), usable and accessible to all through a web platform and a mobile app.

The partners involved in the implementation of this project are: the coordinators FEDERSID from Italy, CETEM (Spain), ILI (Germany)  CEIPES (from Italy, too) and Munka-KörAlapítvány (Hungary).

These days, dedicated to the meeting, have been very productive and the partners had the opportunity to verify that the work is proceeding successfully. 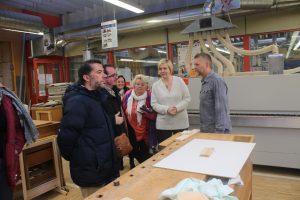 Thanks to ILI partners, from FAU university, we had the occasion to know closely this practice.

The good relation and the great collaboration between the partners play for sure an important role in the ambitious achievement of the relevant objectives.

We can see the incredible results of these products and we are looking forward to present this outputs at the next and last transnational meeting in Palermo. 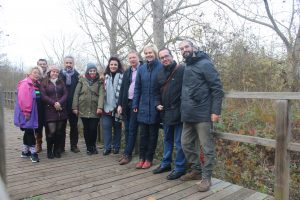 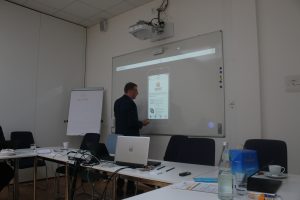 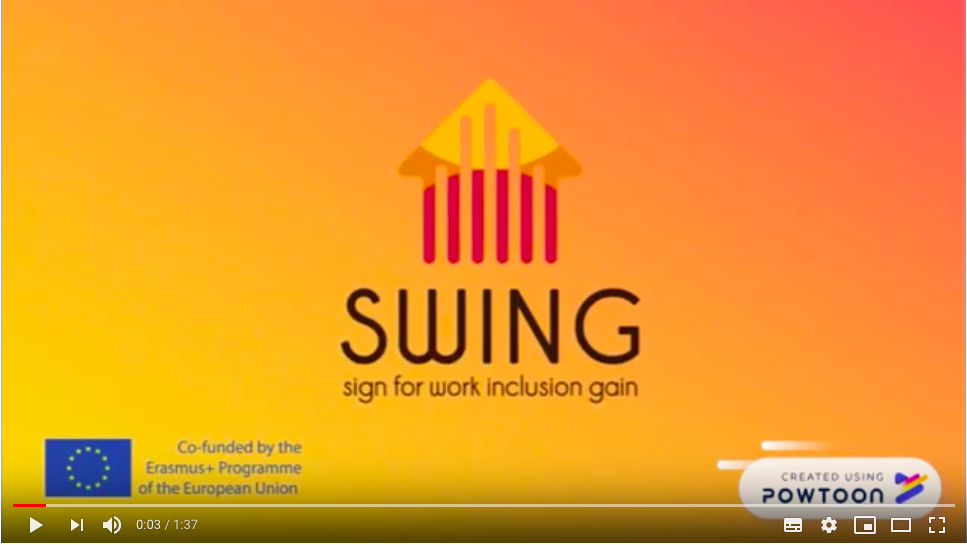 Hello! We are glad to show you all the promotional video of SWING project.
Enjoy it! 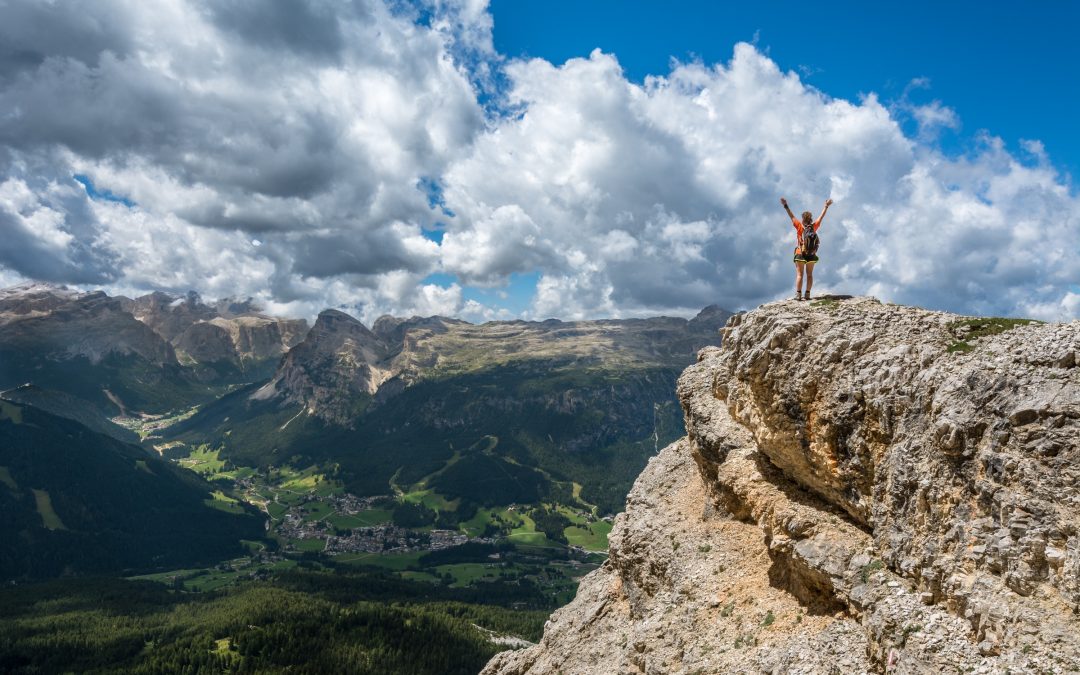 SWING project consortium is glad to inform you all that the 3 reports of the Intellectual Output 1: “Directory with words, expressions, actions that it has to be necessary for a suitable communication with people with hearing impairments in 3 different work environments”, has been published in the “publications” section of this website.

You can have a direct access from this link—> http://www.swing.infoproject.eu/publications/

The output aim was to make a list of 150 words per each work field (450 in total), but in order to achieve these results, different activities have been carried out:

1) Design of the Methodology and Identificaton of the work situations to be studied
2) Observation of the work situation in several selected companies  in Italy, Spain, Germany and Hungary: creation of a first draft of words list.
3) Interviews to people with and without hearing impariments to receive feedback about the draft list.
4) Mock conversation: a role playing activity aimed to receive more feedback about the word list.
5) Creation o the final list of 150 word per sector.

The final words lists and the reports that describe all those mentioned activities are available at the following links: